It seems like XRP pumpers are hoping for additional upwards action, while Cardano (ADA) founder Charles Hoskinson, chimed in on the rising pump and dump issue across the crypto space, warning that those joining these scams will end up... 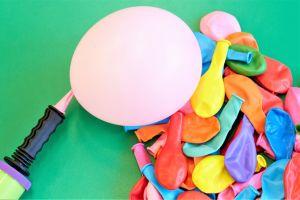 It seems like XRP pumpers are hoping for additional upwards action, while Cardano (ADA) founder Charles Hoskinson, chimed in on the rising pump and dump issue across the crypto space, warning that those joining these scams will end up losing a lot of money.

The most recent update by the aptly named Telegram group 't.me/pumpxrpofficial' formed five days prior, states that "after yesterday’s downside, XRP has created a beautiful rounding bottom and looks like it’s ready for more upside at the moment."

Also, a statement was released on behalf of the Buy and Hold XRP Telegram group administration, it said, as a response to the events of February 1 - the day of the international 'buy and hold' event - and the "misinformation circulating" online. "Due to the overwhelming global spike in demand for XRP, many key exchanges had experienced system bottlenecks," they said, adding: "We are unsure if the actions of the international community caused a direct increase in the price of XRP."

As reported yesterday, XRP price rallied, doubling in just two days before taking a dive. The event was the result of coordinated pumping campaigns on platforms such as Reddit and Telegram, including the almost 100,000-strong t.me/pumpxrpofficial, which were working on repeating the dogecoin (DOGE) rally.

And now, the admins of the infamous Telegram group claim they "look towards building an international governance model with the goal of bringing value and talent to the [XRP Ledger]. We look forward to working in concert with existing infrastructure to see this through."

All this comes after XRP had crashed due to a regulatory crackdown in the US, which was followed by a number of exchanges suspending or delisting the coin. The purge doesn't seem to be over, apparently fuelled by the latest pump and dump activity, as PrimeXBT decided to remove XRP trading pairs and delist XRP on February 10. Also, Japanese exchange Coincheck briefly halted XRP sales "in consideration of the transaction status" with XRP-affiliated blockchain company Ripple.

Unexpectedly, saved by a massive pump in the last days of January, XRP came out as the best performer among the top 10 coins by market capitalization in January. At 12:56 UTC on Tuesday, it's trading at USD 0.385. It dropped 35% in a day and increased almost 45% in a week. 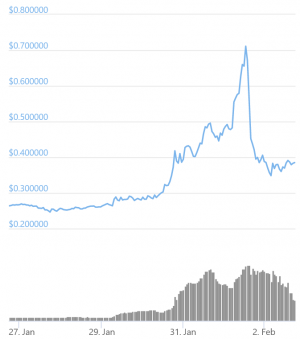 Meanwhile, Cardano's Hoskinson noted "a huge increase" in pump and dumps, as well as scams. Those in the space long enough will notice "a cyclic scam curve," with groups on social media sites, including Reddit and Telegram, trying to pump a (usually smaller) coin's price systematically, after they had bought early, hurting retail investors as they dump.

"We saw this done with GameStop, [and] dogecoin, and there may be some organized activity for XRP," said the CEO, adding:

"In times of high spikes, lots of volatility, and other such things, it is a really, really, really, really good idea for you to exercise extreme caution and due diligence. Sustainable things generally don't go up 500% in a day, 'cause they often collapse 500% in a day, and you're gonna be the one who's left with a bag in your hand, and those who try to manipulate this - it's a game for them, they make a lot of money."

Hoskinson also reminded people of the dangers of giveaway scams. Ripple sued YouTube over this matter in April last year.

There are those within the Cryptoverse that also believe this recent XRP rally could have been an exit pump with whales looking to get out of XRP.

So many whales bag-holding $XRP, one exit pump was not enough, they needed two.

Nevertheless, a lot of money is about to flow into big-caps as soon as it's over. pic.twitter.com/HY3hfEDAX2

And while all this was developing, many on Reddit have been discussing their lost and left bags, pump-&-dump groups and how to stop them, lessons learned, and warnings to others.
____
Learn more:
Dogecoin Dumped, Tron Dumped, Now XRP Doubles And Dumps
Researchers Found a Way to Catch Altcoin Pumpers and Dumpers Early
GameStop: How Redditors Played Funds For Billions (And What Might Come Next)
A Reddit Army Blurs The Line Between Crypto and Traditional Finance