While relying on internal documents can be controversial, Zuckerberg's emails are so detailed and specific that they're impossible to ignore.

Facebook CEO Mark Zuckerberg’s own words play a starring role in the government’s case to break up his social network.

“It is better to buy than compete,” he allegedly wrote in an email in 2008, according to the lawsuit. Four years later, after Facebook purchased what he had called a “very disruptive” photo-sharing app, he celebrated by explaining to a colleague in another email: “Instagram was our threat. … One thing about startups though is you can often acquire them.”

As an antitrust professor preparing a new spring course called “Antitrust for Big Tech,” I read the FTC’s Dec. 9 complaint with great interest. I have taught my students for years that internal documents can come back to haunt antitrust defendants. But I have never seen a plaintiff’s case rely so heavily on a CEO’s own words.

As I read the FTC’s summary of the arguments it plans to make at trial, I began to highlight every direct quote from an internal Facebook communication. My highlighter ran out of ink.

Basing a monopolization case on a CEO’s own explanations of his conduct may seem like a straightforward strategy to most people. But among judges and antitrust scholars, it’s actually controversial, as it is sure to be in this case.

Despite that controversy, the FTC’s choice to hoist Facebook by its own petard makes sense. Zuckerberg’s emails are voluminous and specific in describing how the mergers will insulate his company from competition. They avoid most of the problems critics have with using what lawyers call “hot documents” to make an antitrust case.

It worked against Microsoft

And anyway, it’s worked before.

The case against Facebook bears similarities to U.S. v. Microsoft, the landmark 2001 case that found the software company liable for monopolization. Here, the FTC will have to prove that Facebook, like Microsoft, acquired its market power in the social media market by excluding rivals, not merely by making a great product. And in both cases, internal statements by executives play a big role.

In the case, the government produced a 1995 memo in which Microsoft founder Bill Gates identified Netscape as “a new competitor ‘born’ on the internet.” A few years later, another executive allegedly said, “We are going to cut off [Netscape’s] air supply.”

When Microsoft proceeded to do so by impeding Netscape’s access to Windows users, statements like these made it hard for the company to argue that its conduct wasn’t predatory, and Microsoft lost the case.

As successful and intuitive as the strategy is, courts are surprisingly reluctant to hang their antitrust rulings on internal documents revealing an executive’s intent.

The problem with relying too much on internal emails

Judges often say that antitrust law is interested only in the economic effects of a business’s conduct – such as whether it suppressed competition – not the motives of its executives. Critics have argued that CEOs are not economists and are sometimes prone to chest-thumping braggadocio, making their emails and other communications better for wowing juries than making an economic argument.

Judges and scholars worry that juries will see all aggressive comments as evidence of exclusionary intent. But you can “destroy” a competitor by outdoing him; economists call that competition.

For example, Facebook’s employee manual reads: “If we don’t create the thing that kills Facebook, something else will.” That sounds ominous, but creating things to keep rival startups at bay is exactly what the antitrust laws want Facebook to do – innovate.

More fundamentally, relying on statements like these – where a defendant seems to reveal subjective intent – is controversial because the law is unclear about why or whether a defendant’s intent to suppress competition matters at all. The clearest statement we get on the issue – from U.S. v. Alcoa – is enigmatic: “To read the [law] as demanding any ‘specific’ intent, makes nonsense of it, for no monopolist monopolizes unconscious of what he is doing.”

Even lawyers haven’t been able to figure out exactly what that means. 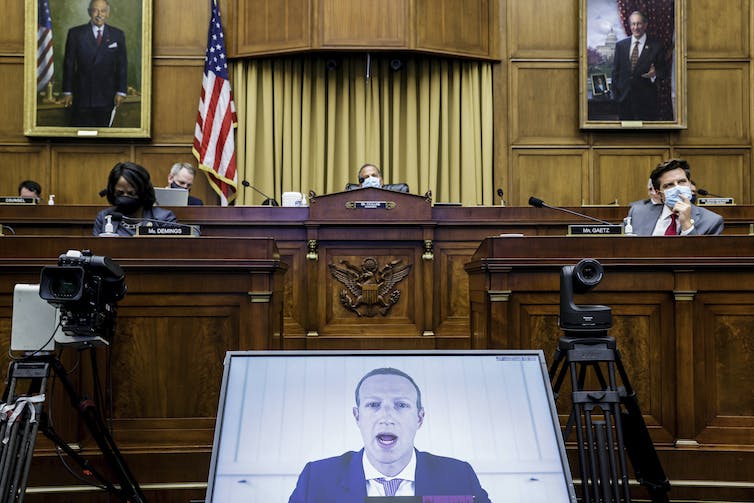 The role of intent as evidence

On the other hand, other types of evidence may not be enough to make an antitrust case.

The inquiry in a monopolization case is often framed as whether the monopolist enjoys its market position because it excluded rivals or because it made a better or cheaper product. The difficulty with using only objective market evidence to answer that question is that the evidence usually points in both directions.

Defendants can almost always identify some product improvement that came from their conduct, muddying the waters of the plaintiff’s story of exclusion. In the Facebook case, the company has pointed to Instagram’s growing user base and improved interface during its time under Facebook’s control.

So in most monopolization cases, courts get stuck if they try to use only market facts to answer the ultimate question: Did the monopolist flourish because of the improvements or because of diminished competition?

That’s why judges will turn to evidence of intent, especially if it is more than just economically ambiguous declarations of war against rivals.

Unfortunately for Facebook, Zuckerberg’s emails are explicit and detailed in describing his desire to avoid competing with Instagram and WhatsApp. The court will find that relevant – and possibly damning.

For example, in the months leading up to the acquisition, Facebook’s chief financial officer outlined three reasons for buying Instagram:

“1) neutralize a potential competitor?… 2) acquire talent?… 3) integrate their products with ours in order to improve our service?” Zuckerberg responded, “It’s a combination of (1) and (3).”

Zuckerberg goes on to explain Instagram’s competitive threat at length. By the time he gets to the product improvement explanation, he’s changed his mind. “(3) is also a factor, but in reality we already know [Instagram’s] social dynamics and we will integrate them in the next 12-24 months anyway.”

After the Microsoft case, many companies adopted communications policies that discourage the creation of documents just like these. Google, for one, circulates a five-point antitrust “communications safety” policy to employees.

What I find truly remarkable about this case is not the volume of internal quotes in the complaint, but the paper trail a sophisticated CEO like Zuckerberg created of Facebook’s transgressions – which is now why a federal antitrust lawsuit poses an existential threat to his company.