Trump's Twitter feed shows 'arc of the hero,' from savior to showdown

Trump's hero's journey was etched for all to see in his favorite medium.

The Research Brief is a short take about interesting academic work.

I’ve analyzed over 30,000 tweets from Donald Trump’s Twitter feed from January 2015 to December 2020. They show Trump following a “hero’s journey,” from presenting himself as a savior as he first announced his candidacy for president to his post-election fight and showdown with his perceived enemies.

My paper, which is currently undergoing peer review, looks at Trump’s social media use through the lens of brand storytelling and what is known among scholars as the “hero’s journey,” based on the work of mythologist Joseph Campbell. In his 1949 book “Hero with a Thousand Faces,” Campbell explains that hero quests follow similar trajectories: The hero leaves his ordinary world and enters a place of supernatural wonders. He then faces a series of trials, survives, receives his reward and returns home.

Trump’s Twitter feed – now archived after his account was suspended – chronicles how the president left his comfortable life as a billionaire real estate magnate and entered the political realm as a savior who would protect Americans from immigrants, Muslims, Democrats and even fellow Republicans such as the primary opponents he vanquished to become the party’s nominee. As his Twitter feed tells the story, he also experienced trials that ordinary persons could not have endured, such as the “Russia hoax” and his first impeachment, emerging unscathed. “No collusion, no obstruction,” he frequently wrote, referring to his account of the result of the Mueller investigation into Russian election interference.

His election loss in November means his journey must come to an end, but, to him and his supporters, his job is not complete – and no one else can take his place. So it is no surprise that the hero of the story would fight back with all his might in a final showdown and call on the supernatural energy of his supporters to keep his journey going, such as by urging them to come to Washington and be “wild.” Just a day before his supporters stormed the Capitol, he tweeted: “Washington is being inundated with people who don’t want to see an election victory stolen by emboldened Radical Left Democrats. Our Country has had enough, they won’t take it anymore! We hear you (and love you) from the Oval Office.” 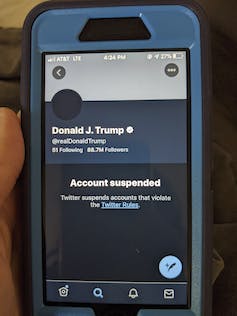 Twitter had no more straws for Trump. AP Photo/Tali Arbel

This tweet has many important ingredients of the hero: The enemy is established (“Radical Left Democrats”), their evil deeds are recognized (“election victory stolen”), the call to arms is sounded (“our country has had enough”) and his special bond with his base and their support are reaffirmed (“we hear you and love you”).

Trump used social media to fuel his political ambitions well before he descended the escalator at Trump Tower to announce he was running for president. From a few million then, his following grew to about 89 million at the time of his suspension, which put him among the top 10 accounts worldwide.

After the Capitol siege, Twitter and other social media companies finally banned Trump from posting on their sites after years of turning a mostly blind eye to his divisive rhetoric.

They joined other tech firms and large corporations and industry groups that have distanced themselves from the president – or even called for his removal using various strategies – following the Capitol incursion he fomented.

What other research is being done

During my research, I also examined five other exemplary studies of Trump’s Twitter use. They show a penchant for denigrating perceived enemies, and personality characteristics that suggest narcissism, insecurity and lack of conscientiousness toward others.

My research confirms what these other studies found but also reveals how his tweets turned steadily more negative over time as his perceived enemies grew in number and his administration became engulfed in successive challenges.