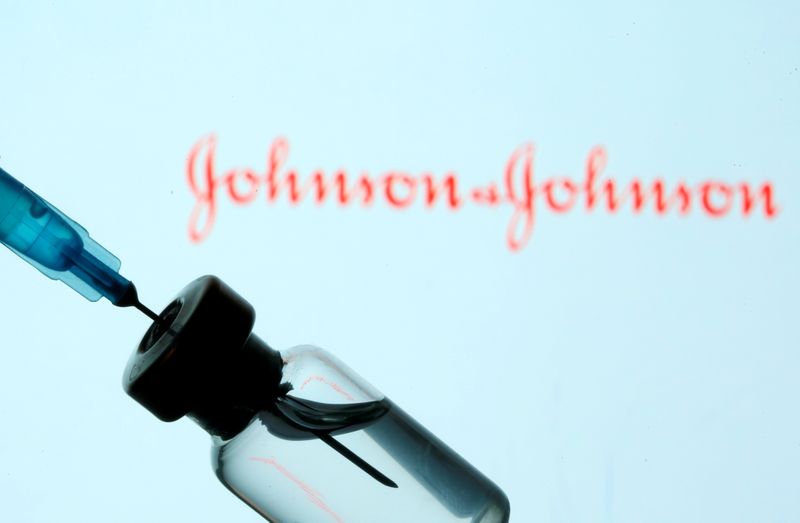 © Reuters. FILE PHOTO: Vial and sryinge are seen in front of displayed Johnson&Johnson logo in this illustration taken

(Reuters) - Johnson & Johnson (NYSE:) said on Friday that its single-dose vaccine was 66% effective in preventing COVID-19 in a large global trial against multiple variants, giving health officials another weapon to tackle the pandemic.

In the trial of nearly 44,000 volunteers, the level of protection against moderate and severe COVID-19 varied from 72% in the United States, to 66% in Latin America and just 57% in South Africa, from where a worrying variant has spread.

The data showed that the vaccine's effect on the South Africa variant was diminished compared to the unaltered virus, but infectious disease and public health experts said it can still help contain the virus spread and prevent deaths.

Rival shots from Pfizer/BioNTech and Moderna (NASDAQ:) were both around 95% effective in preventing symptomatic illness in pivotal trials when given in two doses.

Those trials were conducted mainly in the United States and before the emergence of new variants. These mean that the world is racing against time and with limited supplies to vaccinate as many people as possible, and quickly, to prevent virus surges.

COVID-19 is rising in 37 countries and infections have surpassed 101 million globally.

Top U.S. infectious disease specialist Anthony Fauci said the world needs to vaccinate quickly to try to get ahead of these changes in the virus.

"It's really a wake up call for us to be nimble and to be able to adjust as this virus will continue for certain to evolve," Fauci said.

J&J's main goal was the prevention of moderate to severe COVID-19, and the vaccine was 85% effective in stopping severe disease and preventing hospitalization across all geographies and against multiple variants 28 days after immunization.

That "will potentially protect hundreds of millions of people from serious and fatal outcomes of COVID-19," Paul Stoffels, J&J's chief scientific officer, said.

J&J plans to seek emergency use authorization from the U.S. Food and Drug Administration next week and will soon follow up with the European Union and the rest of the world.

It has said it plans to deliver 1 billion doses of the vaccine, which it will make in the United States, Europe, South Africa and India, in 2021.

Public health officials are counting on it to increase much-needed supply and simplify immunization in the United States, which has a deal to buy 100 million doses of J&J's vaccine and an option for an additional 200 million.

J&J said the vaccine would be ready immediately upon emergency approval, but Stoffels declined to say how many doses.

"The key is not only overall efficacy but specifically efficacy against severe disease, hospitalization, and death," said Walid Gellad, a health policy associate professor at the University of Pittsburgh.

Unlike these vaccines, J&J's does not require a second shot weeks after the first or need to be kept frozen, making it a strong candidate for use in parts of the world where transportation and cold storage present problems.

"Most countries are still desperate to get their hands on doses, regardless of whether or not the vaccine is considered highly effective. Moderately effective will do just fine for now," Michael Breen, Director of Infectious Diseases and Ophthalmology at research firm GlobalData, said.

Several studies have emerged this month showing that a South African variant has mutated in areas of the virus that are key targets of vaccines, reducing their efficacy.

"What we are learning is there is different efficacy in different parts of the world," Stoffels told Reuters.

In a sub-study of 6,000 volunteers in South Africa, Stoffels said, the J&J vaccine was 89% effective at preventing severe disease. In the South Africa portion of the trial, 95% of cases were infections with the South African variant.

"I am overwhelmed by the fact that this vaccine protected against severe disease even in South Africa," said Glenda Gray, the joint lead investigator of the South African vaccine trial.

In the J&J trial, which was conducted in eight countries, 44% of participants were from the United States, 41% from Central and South America and 15% from South Africa. Just over a third of the volunteers were over 60.