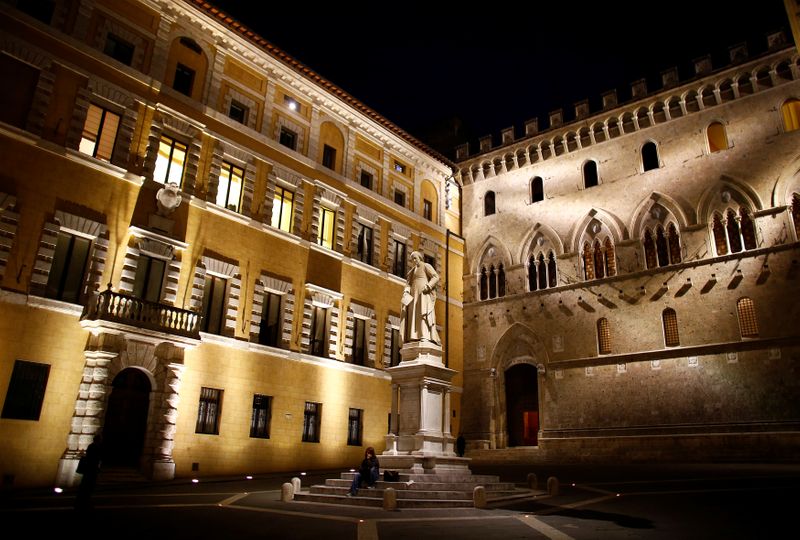 By Giuseppe Fonte and Valentina Za

ROME (Reuters) - Italy's Treasury is working to halve 10 billion euros ($12 billion) in legal claims facing Monte dei Paschi by dismissing some and settling others, including 3.8 billion euros in requests from the bank's former top investor, sources close to the matter said.

Monte dei Paschi's (MPS) raft of legacy legal disputes following decades of mismanagement are hampering Rome's efforts to re-privatise the loss-making bank which it rescued in 2017.

Time is running out for Italy to address MPS's woes by finding a buyer. A change at the helm of UniCredit has stranded talks over a possible tie-up with Italy's No.2 bank.

The Treasury has been studying for months ways to free MPS from its legal risks and resolve a case which has come to symbolise Italy's long-running banking crisis.

To be able to cut its 64% stake in MPS, Italy still needs to find a solution for the 5 billion euros in residual risks.

Rome is now focusing on ways to sidestep the fact that the bank would be held liable with whoever took them on under a joint-liability rule in Italian law, the three sources said.

The plan currently under consideration entails a guarantee scheme based on insurance and re-insurance accords involving state export agency SACE and other private players, they said.

MPS would outsource the handling of the claims to another state-owned firm, Fintecna, given its experience in legal disputes.

If that plan doesn't work, the government would revert to a previous scheme where the legal risk itself would be spun off to another, unspecified entity, a source said.

Before that, Rome is working with MPS to help it to settle the claims from its former top shareholder, local foundation Fondazione Monte dei Paschi di Siena, the sources said.

The Fondazione MPS has seen its wealth evaporate and its controlling stake in the bank reduced to virtually zero after backing a string of cash calls at MPS in recent years.

Two of the sources said the foundation has so far rejected offers from MPS to accept around 70 million euros in cash in return for dropping the claims.

MPS has said it believes it can fight those claims because they are based on decisions taken when the foundation held 49% of the bank's capital and named half its directors.

The two sources said the idea was now to also offer shares and not just cash. MPS holds treasury shares equivalent to 3% of its capital for a current market value of 35 million euros.

The foundation has repeatedly denied any formal talks are ongoing.

The Treasury is confident the accord with Fondazione MPS and other settlements, as well as dismissals, can broadly halve the initial figure, the sources said.

MPS' capital ratios are set to breach minimum requirements this quarter. MPS said on Thursday it would look at a 2.5 billion euro cash call if it can't seal a merger. ($1 = 0.8241 euros)

Disclaimer: Fusion Media would like to remind you that the data contained in this website is not necessarily real-time nor accurate. All CFDs (stocks, indexes, futures) and Forex prices are not provided by exchanges but rather by market makers, and so prices may not be accurate and may differ from the actual market price, meaning prices are indicative and not appropriate for trading purposes. Therefore Fusion Media doesn`t bear any responsibility for any trading losses you might incur as a result of using this data.

Fusion Media or anyone involved with Fusion Media will not accept any liability for loss or damage as a result of reliance on the information including data, quotes, charts and buy/sell signals contained within this website. Please be fully informed regarding the risks and costs associated with trading the financial markets, it is one of the riskiest investment forms possible.