The final week of January passed without any major movements in the market sentiment in either direction. The combined moving 7-day average crypto market sentiment score (sentscore) for the 10 major coins saw a small rise from 5.77 recorded... 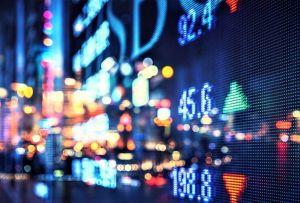 Noticeably, only 4 out of the top 10 coins saw increases in their respective sentscores - and one of them towers over the rest. Tether (USDT)'s sentscore increased by 23.7% over the course of the past week. Compared to it, chainlink (LINK) is up a bit more than 1%, while bitcoin (BTC) and stellar (XLM) saw an increase to their scores of 0.5% each.

On the other side stand the red coins. The least to have dropped are XRP and cardano (ADA), with less than 1%, followed by ethereum (ETH)'s 1%, while polkadot (DOT) and binance coin (BNB) saw their scores decrease by 2.6% and 2.8%, respectively.

That leaves litecoin (LTC) as the coin which dropped the most in the past week, 9.4%.

Additionally, while the same coins remain in the positive zone for the third week in a row, bitcoin is now the only green among them, with the situation being the opposite last week. Unlike three coins last time, two are below the score of 5 this time. 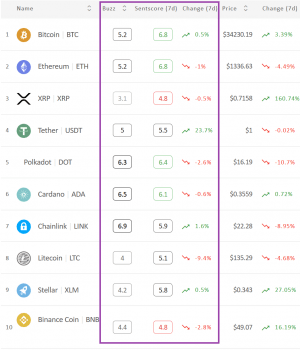 Meanwhile, the top 10 coins' sentiment in the last 24 hours has gone back into the positive zone, with a score of 6.05, jumping from last Monday's 5.79. It may potentially indicate another rise in the weekly sentscore as well, but at the same time, only four are actually green in the past 24 hours. As for today, the four coins in the positive zone are joined by stellar, while no coin is below the score of 5.2 (LTC and USDT).

Daily Bitcoin sentscore change in the past month: 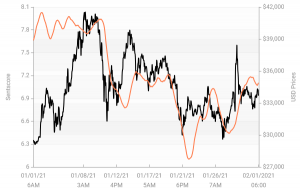 Besides the top 10 coins, Omenics is rating 26 others. And these have had a red week for the most part as well. The sentscores of only seven have increased in the past seven days, and the highest increase is 6.8% by EOS. In the meantime, drops are aplenty, with crypto.com coin (CRO) seeing the highest one, 13.5%. That said, eight coins are in the positive zone, down to ten - back to the number recorded two weeks ago. And while three coins have scores below 5, two more than last week, none are even close to the negative zone.

Omenics measures the market sentiment by calculating the sentscore, which aggregates the sentiment from news, social media, technical analysis, viral trends, and coin fundamentals-based upon their proprietary algorithms.
As their website explains, "Omenics aggregates trending news articles and viral social media posts into an all-in-one data platform, where you can also analyze content sentiment," later adding, "Omenics combines the 2 sentiment indicators from news and social media with 3 additional verticals for technical analysis, coin fundamentals, and buzz, resulting in the sentscore which reports a general outlook for each coin." For now, they are rating 36 cryptocurrencies.