The first month of 2021 is behind us - and what a crypto month it was! There are barely any red coins among the top 100 and the top 50 by market capitalization, and none among the top 10.... 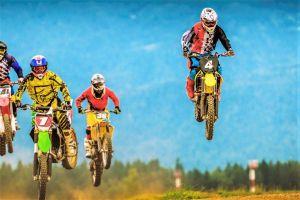 The first month of 2021 is behind us - and what a crypto month it was! There are barely any red coins among the top 100 and the top 50 by market capitalization, and none among the top 10.

The eyes of the world were on bitcoin (BTC) and its performance, as well as its volatility, as it surged to hit the new all-time high of USD 42,000, before correcting lower and hovering around the USD 31,000-32,000 levels. That said, it's actually one of the coins that appreciated the least over the course of the past month.

Ethereum (ETH) also saw its new, long-awaited all-time high in January, rallying to USD 1,449, and dropping some USD 150 since. All in all, among the top 10 coins by market capitalization, it landed somewhere in the middle tier per its performance.

Meanwhile, XRP was saved by a massive pump on the last days of January. 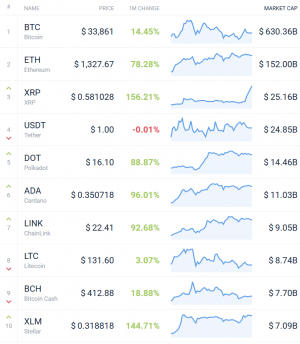 The top 10 coins by market capitalization had a strong first month of this news year. Every single one of them (not taking the stablecoin tether (USDT) into account) saw their prices appreciate over the past 30 days, and nearly all of them by double or even triple percentages. The only exception here is litecoin (LTC) which, even though green, saw the smallest rise among its peers, of about 3%.

On the other hand, XRP sat on the throne in this category as the best monthly performer, having gone up more than 156%. It was a bumpy ride for this coin over the past few months, as it was the biggest loser in December 2020, but also the biggest winner by far just a month before. XRP's January green performance comes amid - or despite - blockchain company Ripple's recent, ongoing regulatory issues with the US Securities and Exchange Commission, which led to the coin being suspended or delisted from a number of exchanges.

Stellar (XLM) is not far behind XRP. It took the second spot with a rise of 144.7%. It rallied in January and took back a place in the top 10.

In comparison, the third-placed cardano (ADA) is up 96%, closely followed by chainlink (LINK)'s 92.7%. Polkadot (DOT) and ethereum also saw substantial rises of 89% and 78%, respectively.

Near the bottom, following LTC, even if with double-digit increases, are bitcoin cash (BCH) with 19%, and bitcoin with 14.5%. 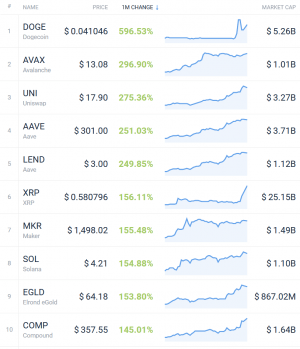 How good January was for many coins can be seen on the list of the winners among the top 50 coins by market capitalization. All of them saw triple-digit rises, the smallest of which is compound (COMP)'s 145%, preceded by solana (SOL) and elrond egold (EGLD), which went up 155% and 154%, respectively.

Speaking of which, quite a few coins on the winners list are decentralized finance (DeFi)-related, such as uniswap (UNI), AAVE, and LEND - all of which appreciated between 276% and 249%, respectively - as well as maker (MKR), which is up more than 155%.

But the undisputed winner of the month among the top 50 is the world's favorite meme-coin, dogecoin (DOGE). Near the end of the month, the coin saw a massive rally which landed it right into the top 10 list where it shortly resided. The rally started after a member of the by now (in)famous r/wallstreetbets subreddit, responsible for the sudden GameStop pump, had asked about DOGE.

In comparison, avalanche (AVAX) is in the second place with a rise of almost 297%.

XRP is also on this list, as the 6th best performer. 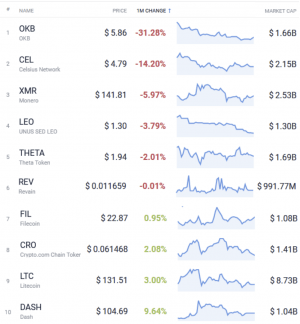 As said above, January was good to many coins, but not all. Nonetheless, among the top 50 coins, we have only six coins whose prices have dropped over the past month.

OKB dropped the most in this category - 31%, and it's followed by celsius network (CEL)'s 14% in the distant second place.

Looking at the top 100 coins by market capitalization, we find only seven coins in the red, meaning that the vast majority's prices have gone up over the course of January.

Doge is very high up in this category too, sitting in the fourth place. It's preceded by voyager token's (VGX) and GNY's massive rises of 1,520% and 1,040%, respectively, as well as fantom (FTM)'s increase of 600%. Doge is followed by funfair (FUN)'s 383%, as well as a number of already mentioned coins, particularly those DeFi-related.