The best (and worst) quotes, adoption and regulation highlights, leading coins, predictions and much more — one week on Cointelegraph in one link!

Coming every Sunday, Hodler’s Digest will help you track every single important news story that happened this week. The best (and worst) quotes, adoption and regulation highlights, leading coins, predictions and much more — a week on Cointelegraph in one link. 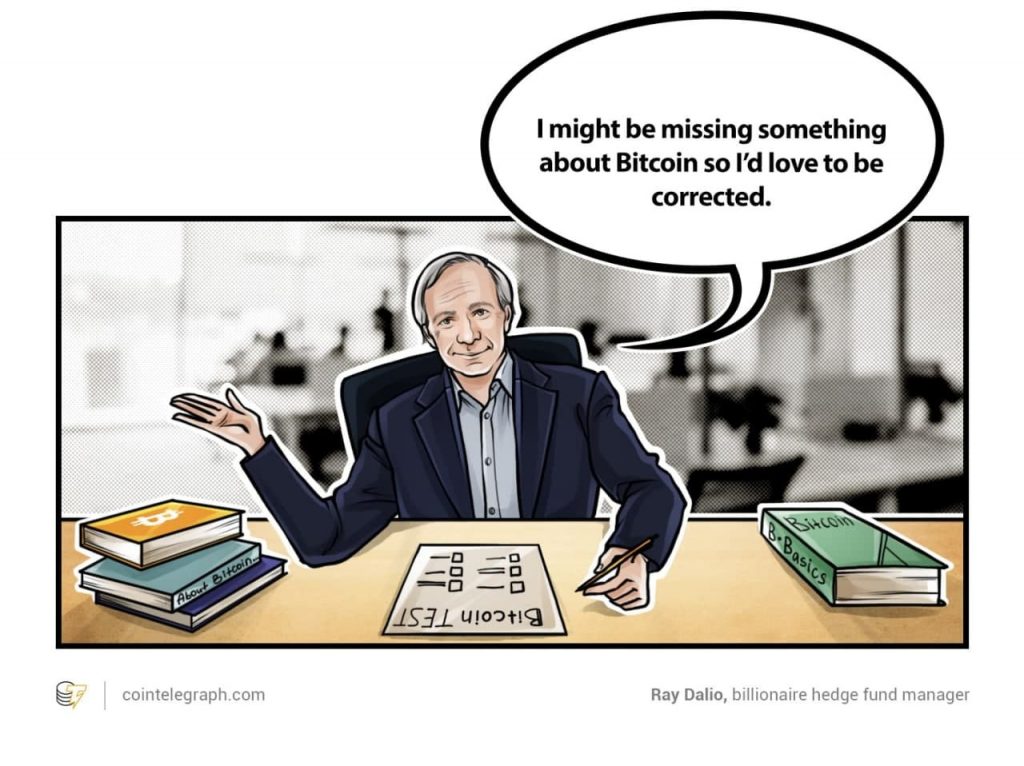 Is… is this happening?! After encountering resistance at $18,420 (a price that was unthinkable even a few days ago), Bitcoin surged to new highs of $18,817.

The latest boost put BTC within touching distance of $20,089 — the all-time high set back in December 2017.

“It’s killing it this year,” Fundstrat Global Advisors co-founder Tom Lee enthused. He added that 2021 could be a year of “fireworks” for the world’s biggest cryptocurrency.

A corporate frenzy has meant that companies now hold over $15 billion in BTC. But this surge isn’t just being driven by institutions. Data suggests that searches for Bitcoin in November 2020 now far outpace what was seen in December 2017.

FOMO is growing. Glassnode reported that there was a major spike in the number of new Bitcoin addresses on Nov. 18 — 25,000 an hour, to be exact. The co-founder of Morgan Creek Digital sold his Chevy to get his hands on more crypto. And the chief information officer of BlackRock says BTC is here to stay… and will eventually take gold’s place.

By all accounts, it looks like Bitcoin has arrived. It’s no wonder 73% of millionaires want to own digital assets before 2022.

ETH hit $500 for the first time since June 2018 on Friday, with other altcoins also slowly staging a comeback.

Reaching this psychologically important barrier delighted traders — not least because ETH has outperformed BTC so far this year.

Cointelegraph Markets analyst Michaël van de Poppe has argued that a realistic top for ETH’s next bull run could be as high as $20,000, while Nugget News CEO Alex Saunders has forecast that Ether could beat its all-time high of $1,400 by the end of 2021.

It’s also been a good week for Litecoin, which has gained more in percentage terms than BTC and ETH combined over the past seven days.

Attack of the vampires: Uniswap loses 57% TVL as rivals up rewards

The celebratory atmosphere isn’t extending across the whole of the crypto sector. The total value locked in Uniswap crashed 57.5% after its yield farming incentive program ended — plummeting by more than $1 billion in less than 24 hours.

SushiSwap saw an opportunity to pounce, with the cloned, automated market maker announcing a new scheme covering the same four pairings previously incentivized by Uniswap. Its TVL has rocketed by almost 160% in two days, from $407 million to $1.05 billion.

As Uniswap liquidity vanished before their very eyes, token holders pounced on a new governance proposal that sought to reinstate rewards in the form of UNI tokens for liquidity providers. The platform is unlikely to go down without a fight.

OKEx to resume withdrawals next week with promises of 100% reserves

After weeks and weeks of waiting, OKEx is finally resuming withdrawals of customer assets.

The shock suspension came on Oct. 16, rocking crypto markets, with reports circulating that the exchange’s founder Mingxing Xu was under investigation by Chinese authorities.

OKEx has now revealed more details about what happened and stressed that the company has been cleared of any wrongdoing.

However, the exchange admitted that existing contingency plans hadn’t covered what would have happened if a private key holder became unreachable due to unforeseen circumstances.

OKEx says withdrawals will be back in full by Nov. 27, and users will be able to claim back their funds in full if they wish. Acknowledging that trust will need to be rebuilt, the exchange is planning to launch a new loyalty reward program to apologize.

Celebrities are catching the Bitcoin bug

Former Game of Thrones actress Maisie Williams certainly caused a scene this week when she asked her 2.7 million Twitter followers whether she should go long on Bitcoin. (46.6% said yes, 53.4% said no.)

Major investor Mike Novogratz was one of those who weighed into the debate, telling the A-lister: “I bought more BTC last night at 15,800. It’s going to 20K and (then) To 65K. The network effect has taken over. I see tons of new buyers and there is very little supply. It’s an easier trade here (than) at 11K. So YES, buy it.”

Later in the week, the rapper Logic revealed that he, too, had dived into Bitcoin.

In a video posted to his Instagram story, the star — whose real name is Sir Robert Bryson Hall II — bragged that he “bought 6 million in Bitcoin last month.”

Despite his posturing, Logic’s investment could turn out to be a particularly canny financial move. Depending on when in October he snapped up the BTC, he’ll be sitting on a profit of between $2 million and $4.4 million. 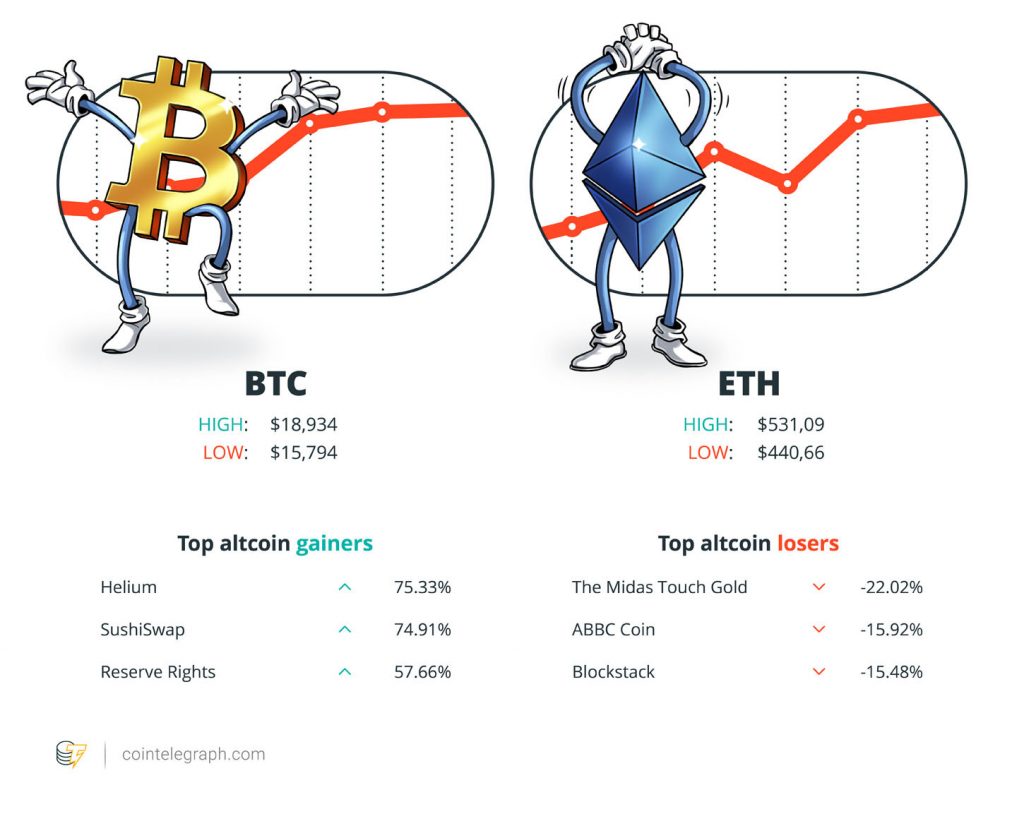 Winners and Losers of the week

For more info on crypto prices, make sure to read Cointelegraph’s market analysis.

“I think we will start seeing lots of traditional players like banks and major payment providers partner with crypto custodians. PayPal will be the first and then more banks and financial institutions will follow.”

“We are extremely pleased to be able to announce the return of a full service for our users and would like to thank them for their continuous support during this difficult time. We apologize for the inconvenience caused and know that we must continue to work diligently to restore their confidence.”

“It’s either going to keep going like right now in the next few weeks and get to $20,000 very quickly, or it’s going to have its bit of a range now and then hopefully positive into next year.”

“I honestly think that Bitcoin will hit $100,000 in the next five years, and then it’s going to become about, ‘Well do they actually try and shut it down, or how do they regulate it and trade it?’”

“If it’s allowed to just continue on its mission and absorb all the money from around the world and become a global reserve currency… I think we can get to $1 million per coin in the next, whatever that is, 15 years.”

“You have the hardcore ‘I’m a cryptocurrency investor’ group but it hasn’t really expanded because it’s been so volatile, there have been so many questions around security and what regulations might do. The number of questions I get on it now is a fraction of what I got a couple of years ago when it was really hot.”

“I think DeFi is here to stay. Even now, with Bitcoin’s popularity rising again, DeFi is still popular. We think there is a lot of growth potential in DeFi.”

“Should I go long on Bitcoin?”

“$20,000 #Bitcoin Is Primary Hurdle Toward $1 Trillion Market Cap — The digital version of #gold but with more-limited supply and a history of adding zeros, appears to be in an early price-discovery stage and may simply continue its ascent in 2021. Mainstream adoption is rising.” 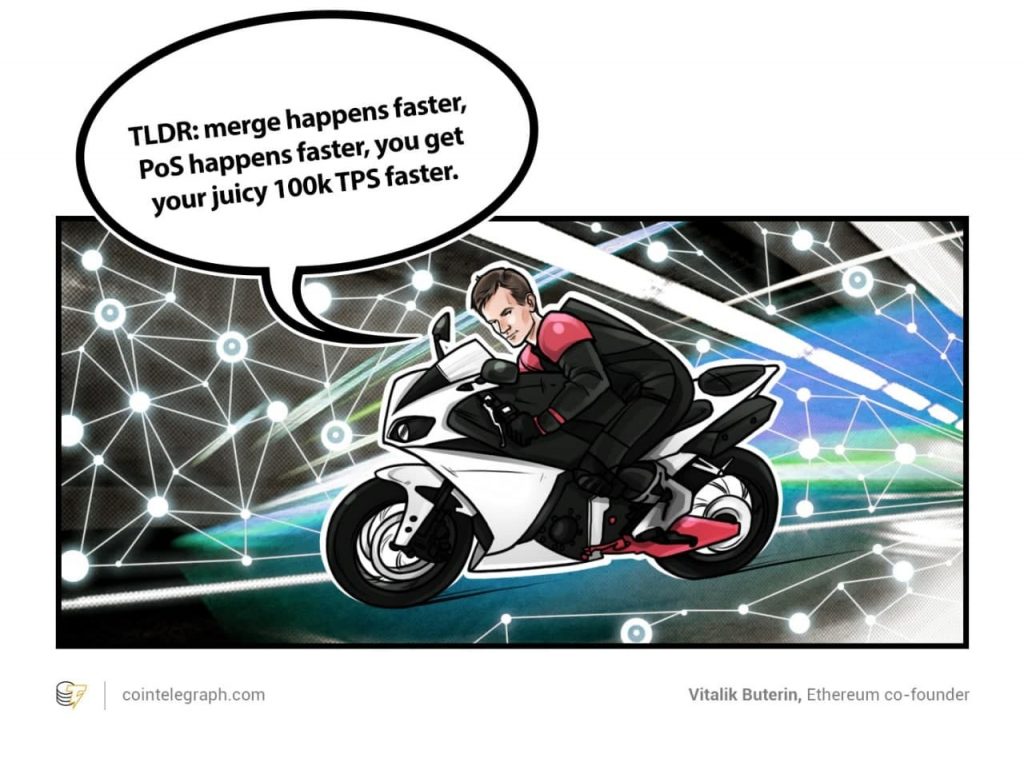 Prediction of the Week

Bloomberg’s McGlone thinks Bitcoin could hit $170,000 over the next two years

It’s been a huge week for predictions. Bloomberg Intelligence analyst Mike McGlone suggested that the next year or two “could add a zero” to the end of Bitcoin’s price — taking it to $180,000 at current levels.

Earlier this week, McGlone also said that a $1-trillion market cap (about $47,000 a coin) was “the next big resistance” for Bitcoin… as long as it could surmount the “primary hurdle” of reaching $20,000 first. “Mainstream adoption is rising,” he tweeted.

Elsewhere, Nugget News CEO Alex Saunders — who we mentioned earlier — told Cointelegraph that BTC can hit $100,000 in five years and $1 million by 2035. He described current market conditions as the “perfect backdrop” for new highs.

Last but not least, a Citibank analyst said BTC has seen “unthinkable rallies followed by painful corrections” — and suggested that highs of $318,000 could be seen some time in December 2021.

FUD of the Week

As the markets surged, there’s one thing that’s worth keeping an eye on: the Fear & Greed Index.

This metric has been firmly in the “extreme greed” category for some time. It was flashing a score of 86 on Friday and an eye-watering 94 on Thursday. That’s close to the all-time high of 95 points out of 100 seen on June 26, 2019.

Compiled using multiple estimates of investor sentiment, the Crypto Fear & Greed Index delivers a normalized score out of 100 to gauge how overbought or oversold cryptocurrency markets really are. The closer the number is to 100, the greater the chance that the market is due for a pullback.

Heavily tied to price action, the index has succeeded in calling price tops with considerable accuracy since its launch in early 2018.

Mainstream media outlets are finally reporting on the recent rally that saw Bitcoin creep close to its all-time high, but some commentators appear to be determined to spread FUD.

The Financial Times published an editorial that warned Bitcoin’s “status as a safe haven is more theoretical than anything else.”

However, there was some support for Bitcoin in the media from an unexpected party — China, a country well-known for its tight stance restricting the digital asset. The recent price rally even hit the national news, on state-run CCTV.

Binance has filed a lawsuit against Forbes Media and two of its journalists, Michael del Castillo and Jason Brett.

The exchange alleges that an article published under the title “Leaked ‘Tai Chi’ Document Reveals Binance’s Elaborate Scheme To Evade Bitcoin Regulators” was defamatory, false and misleading — and caused millions of dollars in losses.

The article in question reported that the “Tai Chi” document contained details of a scheme designed to “intentionally deceive regulators” in the United States.

While Forbes says it stands by its reporting, Binance is now demanding compensatory and punitive damages, and there’s no doubt that the company is getting serious.

The exchange has retained the services of Charles Harder, the attorney best known for representing Hulk Hogan in a suit against Gawker Media. He procured a reward of $140 million, and this directly led to the downfall of the media group. 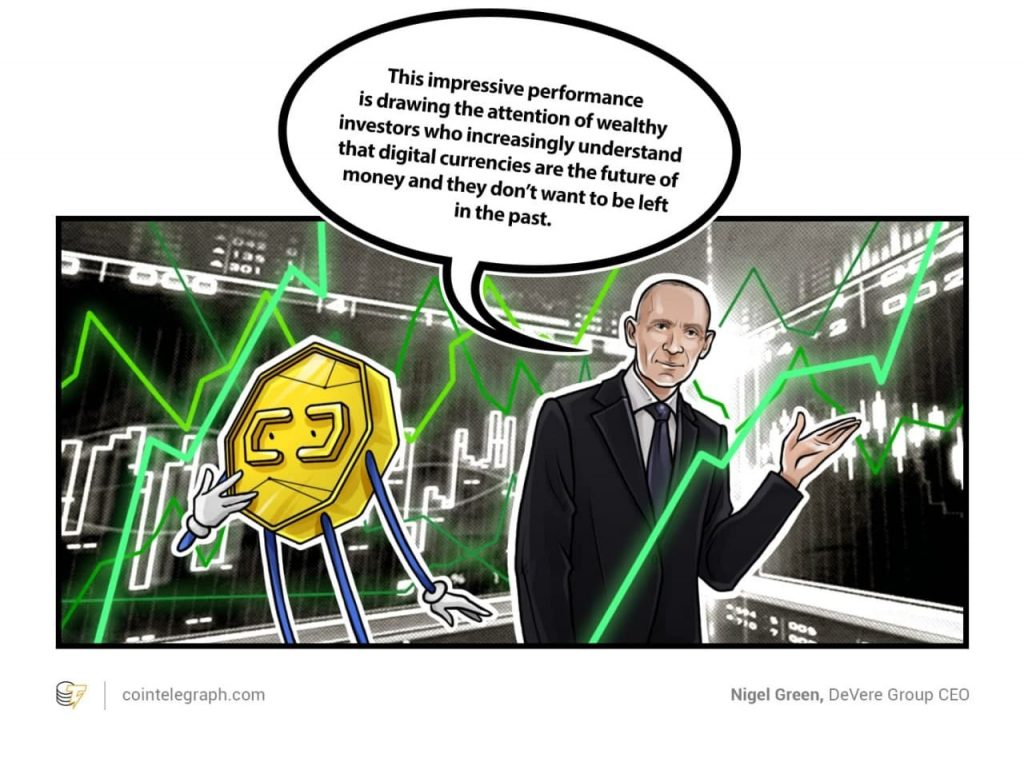 Bitcoin price breaks past $18,800 as bears and bulls map out its path

The price of Bitcoin has stabilized above $18,000 and broken out of the critical $18,500 level. Analysts discuss short-term bull and bear cases.

Uniswap fights back as competitors drain value from the DEX

Even as incentives continue to dry up on Uniswap, TVL across the board seems to have remained steady.

Who watches the watchmen? Crypto may not be as trustless as it seems

Crypto is often seen as trustless and failproof. But as more regulation, venues and developers come aboard, just how trustless is it really?